Tasting the Tree of Life School of Science
Menu

Get introduced to unique flavors of underutilized crops while discovering how evolution has shaped our favorite foods. See what efforts are in place to preserve the diversity of our foods while sampling three savory meals. 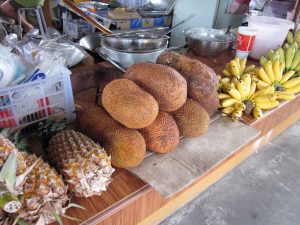 The benefit of studying the biology of all food

Today our agricultural industry is dominated by three crops – corn, wheat, and rice – while humans have domesticated upwards of 10,000 plants! Here we invite you to taste flavors of some not-so-common crops and learn about how biologists are studying the biology of crops that are becoming increasingly important in our global food economy. Click below to explore the menu and learn more!

Today our agricultural industry is dominated by three crops: corn, wheat, and rice. While humans have domesticated nearly 10,000 plants, we rely on 90 of these species – less than 1% – for our diets. Reliance on so few crops is concerning to food security issues. With a growing human population to feed, changing climates and the emergence of new diseases and pests that affect our crops, continuing to invest resources in studying and promoting an increasing number of crop plants is more important than ever.

Not So Common Crops

Amongst the thousands of plants that have been domesticated are plants referred to as ‘underutilized crops’ or ‘neglected crops.’ These species are often grown by traditional farmers and have strong cultural significance to the local community. Typically, these crops have not made it into the mainstream food economy perhaps because they do not store well, have a short shelf life, or there is very little consumer awareness. Further, given the paucity of basic research on these crops, little is known about the nutritional value of the plant, or how to best farm the crop. Some crops, like quinoa, are increasing in popularity and will soon no longer be considered underutilized.

Breadfruit, Artocarpus altilis, is a great example of an underutilized crop. These plants are larges trees native to the Pacific Islands, but are now cultivated in tropical regions across the globe. Breadfruit are known for their starchy yet nutritional fruits that are often prepared by baking or roasting. Breadfruit has long held cultural significance, particularly in many oceanic countries with its charismatic leaves making their way into many paintings and drawings. In Samoa breadfruit was featured on a coin! 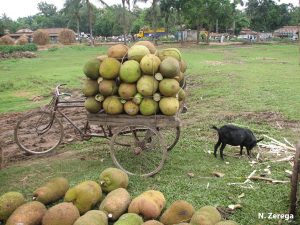 Our keynote speaker, Dr. Nyree Zerega, is a botanist and evolutionary biologist studies breadfruit and its wild relatives. Her work, in collaboration with many others, is helping to describe the basic biology of breadfruit. For instance, she is studying how breadfruit, and many of its edible relatives (e.g., jackfruit) are pollinated by observing and conducting experiments of these plants in their native habitat in Southeast Asia and the Pacific Islands. Further, she is using genomic methods to study the genetic diversity of breadfruit and its wild relatives.

The National Tropical Botanical Garden in Hawaii is home to the Breadfruit Institute. This incredible resource maintains 120 breadfruit varieties collected from 34 islands in the Pacific Islands and nearby countries. Here, studies of nutritional quality, seasonality, fruit productivity, and genetics are a few examples of ongoing work to further study and promote the importance of this underutilized crop.

Crops for the future: www.cropsforthefuture.org 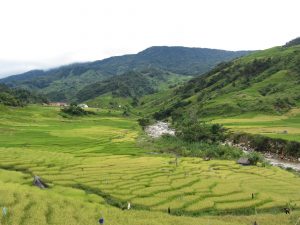 Humans have been producing food through agriculture for thousands of years. Through artificial selection, we have improved crops by selecting features of plants and animals that make them more beneficial to us. Learn how artificial selection and domestication has affected the diversity of some of the most common ingredients on our plates. Click below to explore the menu and learn more about the science of this meal.

You may think of domestication as the process of making a wild animal friendly and loyal enough to keep as a pet, but did you know that we can domesticate plants, too? Domestication is simply the act of adapting something “so as to be cultivated by and beneficial to human beings.” The

ability to grow a reliably fruitful food crop allowed early communities to settle down and sustain larger populations, and we continue to domesticate today. With advances in science and technology, we can breed plants and animals in ways that make them more useful for us: fruits and vegetables can grow larger and more flavorful, meat is fattier and tastier. By choosing to breed only those offspring that benefit us the most – with the biggest, tastiest piece of fruit for example – humans change the evolution of those plants and animals via a process called artificial selection.

How has domestication fostered diversity of foods? 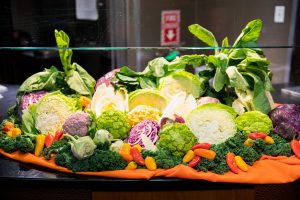 Most of the food we eat today is the result of domestication! Thanks to artificial selection for different features, some crops have become very genetically diverse, meaning there are many varieties of the same species of plant, resulting in many different food crops.  On a summer day, your garden might burst with different tomatoes ranging from bite-sized cherry tomatoes to astoundingly beautiful and delicious heirloom varieties such as Cherokee Purple, Brandywine and Green Zebra. Did you know that cabbage, kale, kohlrabi, broccoli, cauliflower, and Brussels sprouts are all different varieties of one plant species? Humans selected for different features in breeding each of these crops, resulting in this wide range of vegetables, several of which are displayed and featured in the curried vegetables in today’s menu.

How has domestication made some food crops more vulnerable to disease?

Some foods, on the other hand, have become less and less genetically diverse through domestication. If we continually select for the same traits in generation after generation of our food crops, each individual food crop will be almost genetically identical to others of its kind, which can have disastrous consequences. A lack of genetic diversity in potatoes in Ireland in the 1840s led to the infamous potato famine. Irish potatoes became infected with the water mold Phytophthora infestans. Since potatoes grow as clones of their parents, they are genetically 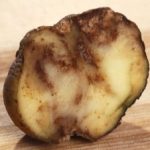 identical. If one plant lacks resistance to a gene, so do the others, and a disease can spread like wildfire. In the case of potatoes, the mold, moist weather and genetically identical potatoes led to rampant late blight, a disease that kills all parts of the potato plant, resulting in the Great Irish Famine. The potatoes we eat today (and featured in today’s herb roasted potatoes) have likely been selectively bred to resist late blight, among other known diseases.

Did domestication cause a banana-pocalypse? 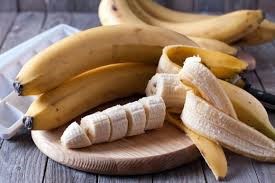 Have you ever wondered why banana flavored candies don’t taste like bananas? Up until the 1960s, most people knew and loved the taste of a type of banana called the Gros Michel. These bananas were sweeter and are said to taste more like the banana flavoring we use in candies giving rise to the (as yet unsubstantiated) legend that artificial banana flavoring is based on the Gros Michel bananas. While we still use this flavor extract, you probably have never actually tasted a Gros Michel banana. In the 1950s, Gros Michel bananas underwent a ‘banana-pocalypse’ – becoming infected with Panama disease, contracted from the fungus Fusarium oxysporum cubense. Commercial bananas mostly grow from cuttings of existing plants, meaning each successive banana is genetically identical to its ‘parent’, resulting in little to no genetic diversity. This lack of genetic diversity left Gros Michel bananas defenseless and they were quickly decimated by Panama disease. The Cavendish bananas we buy at the grocery store today became popular after the Gros Michel because of this strain’s resistance to Panama disease. However, in 1992 a new strain of the Panama disease fungus began killing Cavendish bananas. Enjoy your bananas now – another banana-pocalypse may soon be upon us…

Lear. (2012). Our furry friends: The history of animal domestication. Journal of Young Investigators. 23: 1-3. 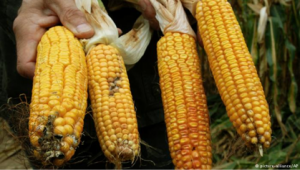 Preserving the genetic diversity of our food

When you look out on a perfectly planted row of Jersey sweet corn, these plants are almost genetically identical. However on a global scale, there are many varieties of edible corn that are genetically distinct. Why is genetic diversity of our crops important? Click below to learn why and how we are preserving crop diversity here in the U.S while exploring our seed-filled menu!

Why is the genetic diversity of food important? 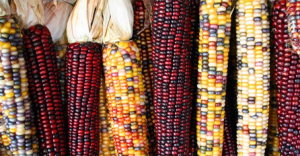 The instructions for how to make every inch of an olive tree, a blueberry bush or a tomato vine are found the genes encoded in each plant’s DNA. You may think that a blueberry is a blueberry is a blueberry, but small differences in genes can lead to significant differences in the form of the organisms – or this case the blueberry. For instance, genetic differences could mean some individuals have the ability to withstand a drought when others might wither. Other individuals may be able to to survive a new insect pest when still others would be severely damaged. Thus, genetic diversity among individuals in a population is critical to allowing a given plant to survive new environmental challenges like a drought or novel pest. While wild strains of many crop plants demonstrate much genetic diversity, selective breeding and some agriculture practices can decrease that genetic diversity, making some crops more vulnerable to disease or other challenges. (For more on this, go to Stories of Domestication.)

How are we preserving the genetic diversity of our food?

In order to store and preserve the genetic diversity of plants, seeds from different species and varieties are deposited in seed banks, which store these seeds so that they are not lost over time. One of the first seed banks was founded in St. Petersburg (then Leningrad) by the Russian Scientist Nikolai Vavilov in the 1920s. Now seed banks exist all over the world. Perhaps the most famous is the so-called “doomsday vault,” the Svalbard Global Seed Vault found not far from the North Pole in Norway. As other seed banks have been lost or damaged by floods and other disasters, this vault was built to withstand the ravages of natural disasters, weapons and climate change, providing unmatched safety and security for the seeds within. The Svalbard vault contains duplicates of seeds that are deposited elsewhere with local or national seed vaults, and acts as a last resort option for obtaining lost seeds. 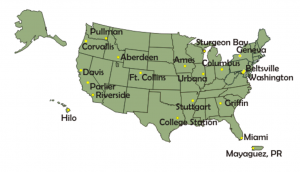 The United States has a large network of seed or germplasm vaults scattered throughout the country and run by the US Department of Agriculture (USDA). Germplasm refers to any seed or tissue that has the genetic material to generate a new living organism. The US network consists of 30 germplasm collections, each focusing on a different subset of crops. For example, the Hilo collection in Hawaii houses the seeds of tropical fruits like guava, papaya, pineapple and starfruit, while the Geneva bank in upstate New York focuses on apple varieties. Germplasm collections also exist for animals (including invertebrates like bees and other insects) and microbes (bacteria and fungi). We can’t anticipate every possible threat to our crops, nor can we predict which genetic variants will be most valuable to surviving those challenges. But the Germplasm collections organized by the USDA, and duplicate samples of many seeds stored in the Svalbard vault, represent our best hope for preserving and protecting our food crops and their genetic diversity for the future.